Kassatsu-Jizai Jyuku is a school within Japanese martial arts that would like to teach how to both invigorate the body and how to kill to the rest of the world.
We translated this HP with translation software. In the future, we will adjust details little by little.
▼Attention：The lesson of KASSATSU-JIZAI-JUKU is performed in Japanese in principle. 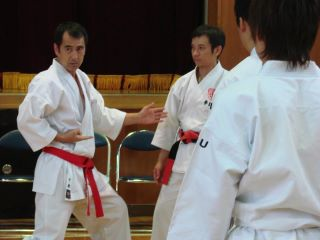 Chito-Ryu is a school of karate that was founded by Hanshi Tsuyoshi Chitose. The headquarters is located in Kumamoto city and has chapters both within Japan and abroad.
First Generation Tsuyoshi Chitose Sensei studied under the masters (i.e. Sesho Aragaki Shihan, Kanryo Higaona Shihan, Chotoku Kyan Shihan, Choyu Motobu Shihan, Sanra Chinen Shihan) of the two main schools of modern karate known as Shuri-te and Naha-te.
However, Tsuyoshi Chitose Sensei discovered both the good and bad points of each of the main schools of karate and therefore created his own style based on his knowledge and training as a medical doctor. Moreover, he incorporated the technical aspects of Shuri-te that help to develop alertness and agility, and the aspects of Naha-te that help to forge a dignified character. At the same time, he created a system that strengthens the body through training, improves posture and breathing, and helps to foster a good attitude.
As mentioned above the important aspects of Shuri-te and Naha-te were incorporated into Chito-Ryu karate and the successive lineage of Tode masters that began with First Generation Beechin Chinen (Tekken Chinen) has continued until the Six Generation master. First Generation Beechin Chinen was a member of King Shokei’s Royal Guard, Second Generation Beechin Matsumura was also a member of King Shokei’s Royal Guard, Third Generation Uekata Awane was a member of King Shoiku’s Royal Guard, Fourth Generation was Beechin Hokama, and the Fifth Generation was Chitose Shihan‘s teacher Sesho Aragaki. Kanryo Higaona was also Sesho Aragaki’s student. Chojun Miyagi Shihan, the founder of Goju-Ryu, and Chitose Shihan were close friends who studied at the same dojo under Kanryo Higaona.

It was in Tokyo that Chitose Shihan encountered and became friends with a diverse range of famous martial artists. For example, he learned the basics of Kendo from Sasaburo Takano Shihan who later introduced him to Hakudo Nakayama Shihan and together with Kyuzo Mifune began studying judo.

By the way, in the present martial arts community, not only the unique features and basic understanding of each style are different but also the tournament format is different.

Tournaments are held at various levels ranging from local area tournaments, to the Eastern Japan/Western Japan tournaments, to the All Japan tournament (once a year), and to the International tournament (once every 3 years). Chapters have spread both within Japan and throughout the world starting first in North America (Canada, America), Central America (i.e. Dominican Republic), Europe (Scotland, Ireland, Norway, Finland and Hungary), Oceania (Australia), the Middle East (United Arab Emirates), and Asia (Russia, Hong Kong, Philippines and Singapore). 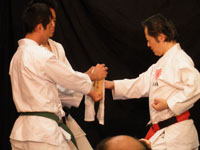 Takatsugu Nakayama Shihan is the head instructor of the dojo.
Chito-ryu First Generation Soke taught Nakayama Shihan that in the future it will be important for the practitioners of karate to study and do research in the various fields of learning (i.e. medicine, sociology, history and philosophy) in conjunction with their martial arts training, and for Nakayama Shihan to teach some of those principles through karate training. The results of Nakayama Shihan’s research has been published in books and magazines, has appeared in DVDs, and has drawn considerable attention in the martial art’s community.

As of 2011, a dojo for both children and adults has been established in Mitakashi city (a city in the Tokyo area), and there are chapters on Aki Island and at Kichisho Temple. Moreover, Nakayama Shihan makes regular visits to the chapter in Ireland in an attempt to improve the overseas technical ability.
Most of the practitioners at Nakayama Shihan’s dojo, who compete in various tournaments both big and small, place in the top three.

In order to make what Chito-Ryu First Generation Soke said above a reality, all those who would like to study, irrespective of the school of karate (however, Chito-Ryu karate will be taught), can come and learn Kassatsu-Jizai Juku.